On 9 December 2002, in a speech given before the retiring Israeli Ambassador to the UK and the Conservative Friends of Israel, Ian Duncan-Smith, the then leader of the Conservative Party said this:


"Appeasement is not an option… Every democracy has a right to defend itself... Israel is no exception. Israel is a part of the front line for democracy against terrorism. It must not stand alone. And, Mr. Chairman, we will not let it stand alone… Saddam Hussein is a constant and dangerous threat… There is no doubt that he is obsessed with building and acquiring weapons of mass destruction. Thanks to Israel, his earlier attempts to develop a nuclear arsenal were prevented…

If there is one section of our society that is in a state of preparedness it is the Jewish community. As I have seen in every visit I have made to Jewish organisations across the country, instead of waiting for the State to solve a problem, you get together and try to solve it for yourselves…

The COMMUNITY SECURITY TRUST does so much to ensure that Jewish people are able to worship in freedom and to combat anti Semitic abuse.

The CST has been invaluable in providing information to relevant authorities about individuals and organisations with links to terrorists... Thank goodness for the CST…

We have not yet vanquished terrorism or anti Semitism. We have a long way to go. As well as establishing mechanisms for protecting Jewish people in Israel, through the work of Conservative Friends of Israel, you ensure that the needs of Israel are heard and represented throughout the Conservative Party.

That two thirds of the Conservative Parliamentary party are also members of CFI… Your Excellency, shortly you will return to Israel after giving unstinting service as Israel's Ambassador in Britain. You will know by now who are real friends of Israel."

Almost all of those who voted for war with Iraq in March 2003, seem to have been members of 'Friends of Israel' groups. The Community Security Trust tells us this at the Home Page of its website:

The ethos of the CST is that the Jewish community is responsible for its own security. The CST draws upon a network of 3,000 trained volunteers throughout the country… These personnel are trained by the CST, and by the Police, so that they can provide the highest level of security for the Jewish community."

Vigilantes, then. Nothing wrong with vigilantes, especially when the police, the Judiciary and the Government don't seem to give a monkey's what happens to you.

However, I thought vigilantes were politically incorrect. I thought we were supposed to frown upon vigilantes, not get them trained up by the boys in blue. Looks like one law for one lot and another law for the rest to me.

I wonder if the CST and Tony Blair's government would mind would mind if I, an Anglo/British Englishman, organised a 'network of 3,000 trained volunteers' 'so that the highest level of security' could be provided for the indigenous British community in this country? For that matter, seeing as our Jewish chums only comprise 1-in-200 inhabitants of this country right now, shouldn't we Anglo-Brits have 3,000 x 200 = 600,000 trained volunteers looking out for their own?

I wonder if it would concern such folk if I announced that my 'ethos' coincided precisely with that of the CST. To whit: the British community 'should be responsible for its own security?' I wonder if the police would help me train my vigilantes?

I'll tell you what else I wonder. I wonder if the CST is keeping an eye on you and me. I wonder if they'll howl up a storm if the information posited here becomes known. I wonder if a bloke who considers himself a 'representative' of the British people 'on matters of security,' insofar as everyone who is British should be, would fall foul of an organisation like the CST, who 'represent the Jewish community on matters of security.' If they are in the business of preventing such as myself from telling those truths that might not reflect too well on the wider Jewish community, wouldn't this suggest that the security and happiness of the British people and the security and happiness of the Jewish people are mutually exclusive as far as an organisation like the CST is concerned?

This is a rhetorical question. I know the answer. As do you and the CST. 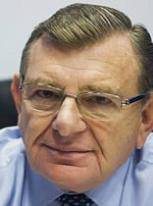 P.S. The boss of the Community Security Trust is none other than Gerald Ronson of Guinness scandal fame. The 'disgraced tycoon' was jailed for a year and fined £5,000,000 after his participation in the company's insider trading was proven.

In the 2012, New Year's honours list, many more than me noted, most with some incredulity, that David Cameron had elevated the ex-jailbird to the Companionship of Honour!

Check this out here.
Posted by ironwand at 04:30