He was a broken man

On 3 August 2004, Iraqi veteran and father-of-four, Peter Mahoney, committed suicide in the garage of his home in Botcherby, Carlisle.

Peter publicly criticised the British Government’s decision to invade Iraq in an interview he gave to his local paper on 16 July, a week after he got back from that country:

"The general consensus among the troops was that we were in Iraq so George Bush could seize control of the oil fields. All this talk of weapons of mass destruction was simply a smokescreen as far as we were concerned.

There was certainly no evidence they existed. From what we saw Saddam’s regime did not have advanced weapons. Iraqi troops were using ancient Russian machines. They were firing sticks and stones. They might as well have had catapults…

I think Tony Blair was just following whatever Bush said. He was simply his puppet. He got in too deep and couldn’t back out".

Prior to her husband being called up in March 2003, Donna wrote a letter to Tony Blair stating that neither she nor her husband agreed with the war. She asked him not to go ahead with the invasion and said:

"Peter volunteered to go to Bosnia in October 1998, because he thought it was a good idea. But this time it’s different. We just don’t understand the moral point of this war. It’s not justified. We’re just backing up George Bush, and we’ll be fighting somebody else’s battle".

Following Peter’s death, Donna, his childhood sweetheart to whom he had been married for almost 21 years, said:

"Iraq changed him… He was a broken man… We are all so sad".

He was aided and abetted by Geoff Hoon, Alistair Campbell, George Bush; Dick Cheney; Donald Rumsfeld; Colin Powell, Condoleeza Rice and all of those warmongering British MPs who wagged their tails for war with Iraq.

And then there were these:

Michael Howard, the Tory leader, (Jewish) Rupert Murdoch, owner of The Sun, The News of The World, The Times, The Sunday Times and Sky Television, who is the world's leading media Zionist; Jack Straw, Blair’s Foreign Secretary, who describes himself as 'third-genration Jewish'; Paul Wolfowitz, US Deputy Secretary of Defence, (Jewish); Richard Perle, head of the Defence Policy Board, (Jewish); and all the other Neoconservatives in the USA, all of whom were pushing for a second Gulf War ever since the first one ended.

Most of the Neocons are Jewish also.

They also murdered all the dead coalition soldiers who were not British and those who have been killed in reprisals who are not British.

They also murdered all the dead Iraqis.

On 7 November 2004, The Independent reported thus:

"Military psychiatrists have warned of a sharp rise in the number of British troops returning from Iraq with severe mental illnesses. Soldiers in the Gulf are suffering from high stress levels because the war is so unpopular at home and they are unhappy about their role in Iraq, health experts have revealed".

50 percent of those in treatment at Combat Stress are TA soldiers.

The establishment of this magazine gave the pro-Israeli hawks in Washington and New York a stentorian voice within US establishment circles during the late 1990s. Many of the contributors to The Standard over the years managed to insinuate themselves into the heart of George Bush’s government, at an official and advisory level, in plenty of time to 'advise' a cerebrally challenged President of the necessity of a war with Iraq after the 9/11 disaster.

Almost two million Iraqis have died as a result of US/British intervention in the Gulf in recent times. A great many American servicemen have also died in Iraq, as have a good many British servicemen. However, not one Israeli serviceman has met his maker in similar circumstances.

Oil was the glorious bonus meant to tempt the ultra-corrupt east-coast gangster elite that owns and runs America towards an imperialist America-first vision of the 21st century. But the war was decided upon and created many years before by Jerusalem in Israel, Jerusalem in New York and Washington, and Jerusalem in London.

If you ever hear or read the oft-used euphemism again, remember, almost all of the US 'Neoconservatives' are Jewish. That’s who Our Dear Leader was fighting for. It was for them that our lads died.

I think Tony Blair is the greatest traitor this country has ever known. I wonder if Donna Mahoney thinks the same thing.

Peter and Donna are pictured below: 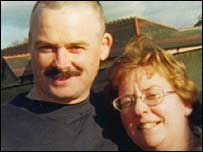