In the lead up to America’s invasion of Iraq, BBC journalist, Steve Bradshaw, spent a lot of time with the Neoconservative hawks who inspired George W. Bush to prosecute the war.

During the course of the resulting 18 May 2003 Panorama documentary, 'The War Party,' Steve says these things:


“This is a story about people who want the world run their way... People who believe American power is there to be used… They call themselves Neoconservatives, right wing thinkers whose dreams of a new American century have become George Bush's foreign policy…

They believe America's military might should promote America's ideals...

Will America's super hawks drag us into more wars against their enemies?"


Here are some of the things the Neocons are seen to say:

“I think the war is just. I think America is going to win.

I think... the whole West is going to benefit.” (Frum was the speechwriter who coined the phrase 'Axis of Evil')

Got that wrong, Dave.

"Iran, Iraq, Syria and Saudi Arabia are the big four and then there's Libya… I'm a student of Machiavelli, I wrote a book on Machiavelli...

We're going to have to bring down a series of regimes who are the sponsors of a network of various terrorist organisations and Iraq is part of it...

We're fighting tyrants. I believe that if the tyrants are removed that there'll be a great deal more peace and chances for peace in the Middle East."

Got that wrong, Mick.


“The President of the United States, on issue after issue, has reflected the thinking of Neoconservatives…

When we have the ability to stop totalitarian regimes we should do so… For those of us who are involved in foreign and defence policy today, my generation, the defining moment of our history was certainly the holocaust…

I think Tony Blair's moral sense is very much reflected in the thinking of many Neoconservatives… His sense that it was right to liberate Iraq is the sense of Neo-conservatives, and was not the view of most foreign offices including probably his own.”

i think lots of Iraqis might disagree with you there, Dick.

Those that are still alive, that is.

And in so far as Tony Blair's answer was yes, even if the rest of the US Security Council doesn't agree with us, I think Tony Blair is a kind of Neoconservative despite himself...

I think we need to… work to remove other dictators with weapons of mass destruction and deal with the threat of terrorism around the world… This (day 22 of the war) is the end to the beginning of this broader war, it's not the end of the end...

I think the President and the military and our leadership will need the support of all of us... as we continue to make this world a safer and a better, and a freer place."

'A safer and better place?'

Got it wrong, didn't you, Bill? Way, way wrong. The Middle East is a basket case now and its problems are transferring themselves to Europe. All because of you and your happy, little gang of bloodthirsty psychopaths.

And the odd bought-and-paid-for President and Prime Minister.


“Virtually all Neoconservatives come out of the left… as I myself did. I grew up in the civil rights movement fighting against discrimination and segregation… and I think it also gives us a certain flair for the ideological battle…

We're very unabashed about using American force... We want to take on our opponents.”

So the 'NeoCon' tag is really somewhat inappropriate?

Thanks for the heads up, Josh.

And, hey! We get the bit about using American force. Putting young, American lives on the line for your ambitions was never going to be much of a concern down your way, was it? But taking on one's opponents? YOU fancy taking THEM on? Up close and personal? Come now, you know as well as I do that taking on one's opponents when they could put a bullet through your skull is not, never has been and never will be, a Chickenhawk thing.

Bit of a Macho implication too far, methinks.

Steve Bradshaw put this question to Professor Eliot Cohen, 'one of America's top military historians' and 'an adviser to the Pentagon:'


"You've expressed some concern over the idea that this is all a conspiracy whipped up by a group of 'neo-conservative hawks' somehow allied to Israel... Explain what you're concerned about."


"Sometimes the word Neoconservative is used when what they really would like to say is 'Jew'… As a Jew I find it offensive… I find it deeply, deeply offensive and untrue… it contains a very old anti-Semitic canard which is that the Jews… have these occult powers and are pulling the strings of the naïve and duped non-Jews.”

So, the fact that the Neocons who pushed the USA into a war that with an Iraq that did NOT have WMD and was, in fact, no danger at all to the West, Israel or any of its neighbours, were ALL Zionists and MOSTLY Jewish, must never be mentioned? We can't point the finger at the bad guys because a mass-murdering Jewish psycho or two might find it 'deeply offensive?'

Eliot, my dear chap, the words 'off' and 'f***' come straight to mind. And if you find that offensive, please f*** off twice.

As regards the facts of the matter, Meyrav Wurmser, another leading Neocon (who happens to be Israeli) was not as touchy as Cohen.


"Yes, many of us are Jewish," she admitted.

"There is no need to apologise for that.

Most of us, ALL OF US in fact, are pro-Israel... We see a tremendous similarity between Israel and America."

At one point, Steve Bradshaw added:

"Some leading Neocons, people whisper, are strongly pro-Zionist and want to topple regimes in the Middle East to help Israel as well as the US. In Washington this is a highly sensitive issue, one to take to Jim Lobe, veteran Neocon watcher."

Steve then puts this question to Jim:


"I was sitting in a bar in Capital Hill and I was told by congressional staff: ‘Careful how you use the word 'Neoconservative'. People might think you're being anti-Semitic. Can you just explain this for me?"

The majority of Neoconservatives have been and remain Jewish, that is a fact."

And the BBC was daring to reveal these things this in May 2003!

Think they'd do so now? 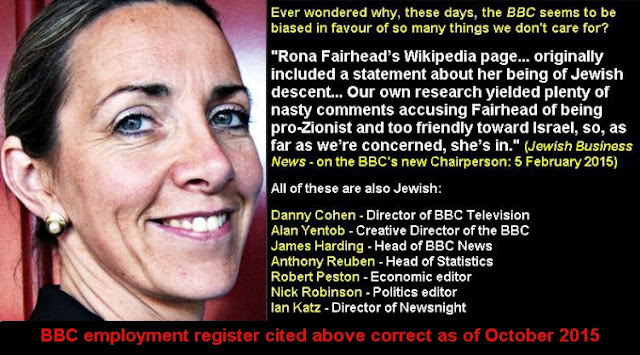 Check with Ken Livingstone, Naz Shah and Jeremy Corbyn if you don't believe me.

QUESTION: Which would you be more offended by:

1) The invasion and progressive devastation of the Middle East, the slaughter of many of its inhabitants and the massive refugee problems that have followed?


“You have a story here about ideas, and LOVE among people… It's real fundamental love and POWER because some of those ideas make policy... and we function and we view ourselves as a group, and we will all stand for each other in defence of each other all the way."

"We are not claiming to be RUNNING THE WORLD. Our job is just to think, and if ideas get adopted, and if ideas turn into policy – wonderful."


On day 22 of the war, when images of Saddam's statue being toppled were flashed across the world, Wurmser exulted thus:


"We actually opened a bottle of champagne. This was a moment we waited for, for many, many years. I mean WE'VE BEEN WORKING ON FREEDOM FOR IRAQ FOR THE LAST NINE YEARS, maybe. My personal feeling was doing AN INCREDIBLY GOOD DEED BY PUSHING THIS WAR because, you know… people got their freedom out of it.”


Got that wrong, didn't you, love?

And millions of Iraqis, Libyans and Syrians have paid the price.

For that matter, we in the West are paying the price also. Inundated by refugees fleeing the hell created by the 'fundamental love and POWER' types on show here, if they are not returned to their homelands once peace is established, our world will be changed forever by a great mass of people who have very little reason to care for an electorate that allowed the Neocons to butcher theirs.

Israel is doing just fine. As are Saudi Arabia, Qatar and the Gulf States. All are much as they were before Meyrav and co. began 'pushing' for a second war against Iraq nine years before it began. (7.5 years before 9/11) No one has invaded them.

Do the cynical bleeding hearts who clamour for more and more angry, young men of military age to be allowed into our world (women and children are very much the minority) ever point out that the aforementioned Muslim countries have taken in not one refugee? Not one refugee despite all the space and facilities to accommodate them?

They do not. They keep this outrageous information to themselves. If another world must be destroyed as a result of these Neocon wars, the elite would have it be ours.

What a bonus, eh, Meyrav? Time for another bottle of champagne, perhaps?


Anyway, ladies and gents, thirteen years ago, when a psychopathic Neocon cabal were were supremely confident that their imperial ambitions were going to work out perfectly, some of them were happy to admit to stuff you are not now supposed to repeat.

In case you hurt their feelings.

However, if, like me, you happen to be a rabid ANTI-SEMITE and don't give a damn what offends those who appear to have the worst interests of most of the people on the planet at heart, go right ahead. 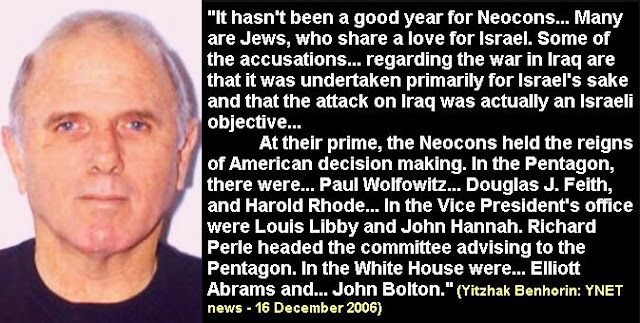 The whistle-blowers cited above are Jewish.

If anyone imagines that I am, actually, 'a rabid anti-Semite,' how come I think these honest Jews are fab? It's the bad guys who do the damage I hate. Not those who are as concerned as I am to prevent their murderous ambitions from taking hold.

When the 'anti-Semitism' lobby lobbies for even more laws that would suppress the facts and promote the myth, ask yourselves this: who is it that they wish to protect?

Are there some Jews the anti-Semitism lobby would be happy to offend? Who would the censors prefer to silence? Benhorin, Bernstein, Shavit and Heller?

Or Wurmser, Perle, Kristol and Ledeen?

Not rocket science, is it?

The anti-Semitism indictment applies only when the establishment profits from it.
Posted by ironwand at 13:07