In the sands of God's armpit

On 13 May 2013, during an interview on Melbourne's 3AW radio , Kiss icon, Gene Simmons, said that the West was under threat and must 'speak softly and carry a big stick,' vis a vis the Muslim world. 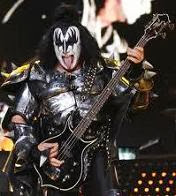 "This is a vile culture and if you think for a second that it’s willing to just live in the sands of God’s armpit, you’ve got another thing coming. They want to come and live right where you live and they think that you’re evil.

Extremism believes that it’s okay to strap bombs onto your children and send them to paradise and whatever else and to behead people.

Your dog, however, can walk side by side, your dog is allowed to have its own dog house... You can send your dog to school to learn tricks, sit, beg, do all that stuff, none of the women have that advantage."

Although Australia is nowhere near as hamstrung as we are, PC rules down under, just as it does throughout the rest of the white world. In other words, for saying what he said, the legendary rock bassist could well have ended up in court charged with a variety of 'racist' and  'Islamophobic'  behaviours.

He didn't. Want to know why?

Gene Simmons was born in Israel.