Truth does not fear investigation 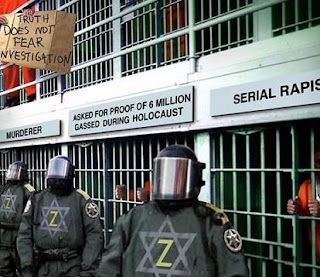 Who would you rather have living alongside of you?

iii) Someone who insists that less than six million died at the hands of the Nazis in WWII?

Ladies and gentlemen, not only are there people in jail all over Europe for 'holocaust denial', some of our own politicians have tried to introduce such a law here!

Homer: - (8th century BC) Greek poet. "To speak his thoughts is every freeman's right, in peace and war, in council and in fight."

Aesop: (6th century BC) Greek slave and storyteller. "We hang the petty thieves and appoint the great ones to public office."

Cicero: - (106 - 43 BC) Roman philosopher and statesman. "The first duty of a man is the seeking after and the investigation of truth."

English proverb: "Write down the advice of him who loves you, though you like it not at present".

Voltaire: (1694-1778) French philosopher and writer. "I may disagree with what you have to say, but I shall defend, to the death, your right to say it."

Attributed to Edmund Burke: (1739 - 1797) - British statesman. "The only thing necessary for evil to triumph is for good men to do nothing".

George Santayana: (1863 - 1952) Spanish-American philosopher. "Those who cannot remember the past are condemned to repeat it".

Woodrow Wilson: (1856-1924) - 28th President of the United States. "I have always been among those who believed that the greatest freedom of speech was the greatest safety."

George Orwell: (1903-1950) British novelist and essayist. "Liberty, if it means anything at all, is the right to tell people what they do not want to hear.”

"During times of universal deceit, telling the truth becomes a revolutionary act."

"All the war-propaganda, all the screaming and lies and hatred, comes invariably from people who are not fighting."

"Big Brother is watching you".

"If you want a vision of the future, imagine a boot stamping on a human face - forever".

And then there was this:

"Free speech is a bourgeois prejudice."

Finally, one more from George:

Who controls our past and present? Who wishes to control it even more? To the point where every moment of our lives is monitored. Right now, there are more than 4,500,000 CCTV cameras watching every move the British people make. We are the most spied upon people on the planet. And yet our streets are now just about the most dangerous in the entire western world.

'Truth does not fear investigation,' folks.

So investigate.
Posted by ironwand at 12:45