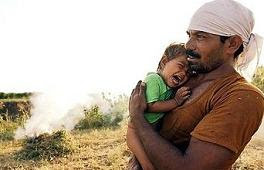 On 3 November 2008, the article, GM genocide: Thousands of Indian Farmers are Committing Suicide after using Genetically Modified Crops, by Andrew Malone, appeared in The Daily Mail.


"Shankara, like millions of other Indian farmers, had been promised previously unheard of harvests and income IF HE SWITCHED FROM FARMING WITH TRADITIONAL SEEDS TO PLANTING GM SEEDS INSTEAD.

Beguiled by the promise of future riches, he borrowed money in order to buy the GM seeds. But WHEN THE HARVESTS FAILED, HE WAS LEFT WITH SPIRALLING DEBTS - AND NO INCOME. SO SHANKARA BECAME ONE OF AN ESTIMATED 125,000 FARMERS TO TAKE THEIR OWN LIFE AS A RESULT OF THE RUTHLESS DRIVE TO USE INDIA AS A TESTING GROUND FOR GENETICALLY MODIFIED CROPS... 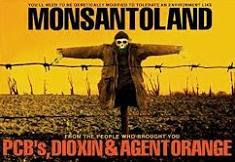 The Indian government had agreed to allow new bio-tech giants, such as the U.S. market-leader Monsanto, to sell their new seed creations. In return for allowing western companies access to the second most populated country in the world… India was granted International Monetary Fund loans in the Eighties and Nineties, helping to launch an economic revolution.

But while cities such as Mumbai and Delhi have boomed, THE FARMERS' LIVES HAVE SLID BACK INTO THE DARK AGES…

Far from being 'magic seeds', GM pest-proof 'breeds' of cotton have been devastated by bollworms, a voracious parasite. Nor were the farmers told that these seeds require double the amount of water. This has proved a matter of life and death. With rains failing for the past two years, MANY GM CROPS HAVE SIMPLY WITHERED AND DIED, LEAVING THE FARMERS WITH CRIPPLING DEBTS AND NO MEANS OF PAYING THEM OFF.

Having taken loans from traditional money lenders at extortionate rates, hundreds of thousands of small farmers have faced losing their land as the expensive seeds fail, while those who could struggle on faced a fresh crisis.

WHEN CROPS FAILED IN THE PAST, FARMERS COULD STILL SAVE SEEDS AND REPLANT THEM THE FOLLOWING YEAR. BUT WITH GM SEEDS THEY CANNOT DO THIS. THAT'S BECAUSE GM SEEDS CONTAIN SO-CALLED 'TERMINATOR TECHNOLOGY', MEANING THAT THEY HAVE BEEN GENETICALLY MODIFIED SO THAT THE RESULTING CROPS DO NOT PRODUCE VIABLE SEEDS OF THEIR OWN.

AS A RESULT, FARMERS HAVE TO BUY NEW SEEDS EACH YEAR AT THE SAME PUNITIVE PRICES… Take the case of Suresh Bhalasa, another farmer who was cremated this week, leaving a wife and two children.

As night fell after the ceremony, and neighbours squatted outside while sacred cows were brought in from the fields, his family had no doubt that their troubles stemmed from the moment THEY WERE ENCOURAGED TO BUY BT COTTON, A GENETICALLY MODIFIED PLANT CREATED BY MONSANTO.

'We are ruined now,' said the dead man's 38-year-old wife. 'We bought 100 grams of BT Cotton. Our crop failed twice. My husband had become depressed. He went out to his field, lay down in the cotton and swallowed insecticide’...

The crisis, branded the 'GM Genocide' by campaigners, was highlighted recently when Prince Charles claimed that the issue of GM had become a 'global moral question' - and THE TIME HAD COME TO END ITS UNSTOPPABLE MARCH.

Speaking by video link to a conference in the Indian capital, Delhi, he infuriated bio-tech leaders and some politicians by condemning 'THE TRULY APPALLING AND TRAGIC RATE OF SMALL FARMER SUICIDES IN INDIA, STEMMING... FROM THE FAILURE OF MANY GM CROP VARIETIES'."

That’s your global, trough-gobbler for you, they get all ‘infuriated’ when somebody points out that genociding the poor isn't very nice.

On 17 July 1999, The Daily Mail reported a 1999 study by a credit research organization, Experian thus:


"A survey identifying Britain's wealthiest family names by their postcard areas has produced a fascinating insight into the national makeup of the 50 surnames most common among the movers and shakers... More than 20 are from Jewish families...

There are more Cohens in the top group than any other family name. Just behind are Levy, Bloom and Wolf... This is confirmed by other surveys, for instance the Sunday Times Rich List 1999, which featured three Cohens, Betterware multimillionaire Andrew, Courts furniture chain tycoon Bruce and DIY store boss Frank.

Hugely wealthy Levys include 59-year old Peter, chairman of the London-based Shaftsbury property company, while the Wolfs are represented by Sir John, a legend in Britain's films…

And then there is the Labour Party’s principal donor, Lord Sainsbury. Sainsbury has donated over £9,000,000 to New Labour. Blair rewarded him with the Ministerial post of Science Minister. This position is crucial in respect of Sainsbury’s business and political interests in bio-technology. In 2002, Blair and Sainsbury will jointly host a science forum extolling the benefits of Genetically Modified Food."

Let's take a closer look at an unelected Lord.

David Sainsbury was parachuted into Tony Blair’s government in 1998 after Blair had ennobled his party's foremost Jewish sponsor the previous year. His qualifications for the Science job, over and above the £12,000,000 or so that he had contributed to the Party coffers by that time, weren't immediately obvious, as he left university with a BA in history and psychology.

If you were to look back through his speeches you would discover that many of them, as you might imagine, were concerned with the promotion of genetically engineered crops and food. Indeed, in December 1998, just three weeks after he attended the first meeting of the Cabinet's Ministerial Group on Biotechnology and Genetic Modification, Tony Blair’s new Minister entertained three executives from the largest biotechnology company in the world, Monsanto, in his private office at the Department of Trade and Industry.

However, when Sainsbury was questioned by Sue Lawley, during his February 2004 appearance on Desert Island Discs, he stated categorically that he had no influence over such matters in government. Moreover, he assured Lawley that he got up and left the room, whenever the debate turned to GM and its environmental consequences. Three weeks later, on 22 February, The Observer told us this:


"One of Tony Blair's closest allies, Lord Sainsbury, was fighting for his political life last night after he was accused of breaching strict government guidelines over his business interests.

Leaked minutes obtained by The Observer reveal that the Science Minister, who has extensive business interests in the biotechnology sector, was at a key Cabinet meeting which drew up a top-level strategy to promote the fledgling industry, a policy shift from which Sainsbury could reap large dividends.

At the meeting Sainsbury was tasked with asking the Prime Minister to use his influence with European leaders to promote the biotech industry. By doing so Sainsbury is accused of contravening Article Six of Cabinet Office guidelines that stipulate: 'Ministers must ensure that no conflict arises, or appears to arise, between their public duties and their private interests'...

Today the Liberal Democrats will write to Blair demanding Sainsbury is removed from the Government and describing his behaviour as unacceptable.

His investments in the biotech industry include Diatech, a company that holds a number of patents for GM products and was placed in a blind trust when he became a government Minister. Through the trust he also has a sizeable stake in another company, Innotech Investments, which has a stake in a US-based firm that seeks out new drugs to cure major health issues.

Paradigm Genetics describes itself as having 'advanced research capabilities in biomarker-enabled drug discovery, with an internal focus on diabetes and obesity'. Also, through his Gatsby Charitable Foundation, Sainsbury has injected millions of pounds into the study of plant genetics at the John Innes Centre, which conducts research into GM crops...

Critics of Sainsbury say that the leaked minutes, from a science and biotechnology committee meeting held earlier this month, show for the first time the clear conflict of interest between the Minister's business interests and his political position.

At the meeting, Ministers discussed a number of key ways to support the UK's biotechnology sector. These included limiting the EU's ability to raise ethical issues surrounding biotechnology, launching an awareness campaign to change MPs and the public's perception about the industry, and encouraging European leaders to push its potential benefits on their health Ministers.

Sainsbury seemingly played a crucial role during the meeting, with Foreign Secretary Jack Straw tasking the Science Minister to contact the Prime Minister on ways to win support within the EU for the biotech industry.

A spokesman for the Department of Trade and Industry - rejected any accusations of wrongdoing, arguing that Sainsbury's role was to promote the industry and he was entitled to be at the meeting…

However, Norman Baker, the Lib Dem environment spokesman, said Sainsbury's position was indefensible. 'He is clearly arguing for an unannounced government promotion of the biotech industry using public funds which, if successful, would benefit him in his personal capacity…

Last night former Environment Minister Michael Meacher echoed the call, saying: 'This is a serious conflict of interest that must be addressed immediately’."

Sainsbury did not resign, nor did Blair ask him to.
Posted by ironwand at 12:10