'Poetry' of Kriss Donald's murderer in line for a prize! 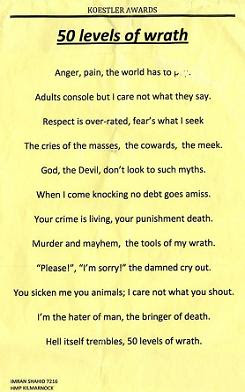 "Kris Donald murderer Imran 'Baldy' Shahid has glorified his brutal life of violence in sick poetry which has been entered for a national award scheme for prison art. It opens a window on the warped mind behind one of Scotland’s most horrific crimes, and shows all the boorish arrogance that has made Shahid a marked man behind bars.


Shahid, now 36, led the gang who abducted Kriss in Pollokshields, Glasgow, in 2004, dragging him into a car simply because he was white. The thugs took the terrified schoolboy on a four-hour terror ride across central Scotland before stabbing him 13 times, dousing him in petrol and leaving him to burn to death.

Shahid’s revolting writing shows no remorse for Kriss or his grieving family. Instead, he justifies his depraved behaviour and tries to portray himself as a fearless gangster, rather than a coward who murdered a defenceless boy…

One poem, called 50 Levels of Wrath… is marked as an entry for the Koestler Awards, run by prison charity the Koestler Trust. It is accompanied by a drawing, apparently a stylised self-portrait mimicking gangster rapper Ice Cube, which repeats his chilling phrase, ‘the world has to pay’.” 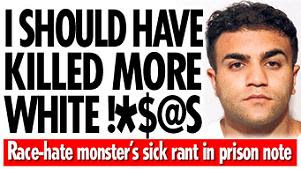 Here's something else Shahid has said since he was imprisoned:

The Koestler Prize was insituted by 'Darkness at Noon' author, Arthur Koestler, in 1962.

Here's what the Koestler Trust has to say about its founder:


"Koestler was the only child of MIDDLE CLASS JEWISH PARENTS. He gave up his undergraduate studies in Vienna to become a ZIONIST PIONEER IN PALESTINE. At 22, he secured a prestigious job in journalism in Berlin, but 4 years later RESIGNED TO JOIN THE COMMUNIST PARTY.

He moved to Paris TO WRITE FOR LEFT-WING JOURNALS, co-authored some GROUND-BREAKING SEX MANUALS and made a year-long VISIT TO THE USSR. In 1936, while reporting on the Spanish Civil War, he was arrested by Franco's fascists, condemned to death FOR ESPIONAGE and spent 3 months in prison in Malaga and Seville. THE BRITISH FOREIGN OFFICE SECURED HIS RELEASE...

Koestler was arrested in Paris at the outbreak of World War Two, as the French AUTHORITIES SUSPECTED HIM OF SUBVERSION. After 3 months in the brutal Le Vernet Detention Camp, he was RELEASED THROUGH BRITISH INTERVENTION...

The Koestler Awards grew out of HIS WORK TO ABOLISH HANGING...

Aged 77, with Leukaemia and Parkinson's Disease, he took his own life by overdose. HIS THIRD WIFE CYNTHIA, AGED 55 AND IN GOOD HEALTH, COMMITTED SUICIDE WITH HIM...

In 1998, a biography by David Cesarani detailed Koestler's sexual affairs and drinking. It included a disclosure by Jill Craigie, wife of Labour MP Michael Foot, that SHE HAD BEEN RAPED BY KOESTLER in 1952.

At the Koestler Trust, we acknowledge that our founder was a controversial figure. We maintain his name because his idea of cash prizes for prisoners' artworks was far ahead of its time and a brilliant way of valuing offenders' creativity. WE ARE A CHARITY WHICH CELEBRATES THE BEST ACHIEVEMENTS OF PEOPLE WHO HAVE MADE GRAVE MISTAKES IN LIFE, AND ARTHUR KOESTLER CONTINUES TO BE AN APPROPRIATE FIGUREHEAD FOR THIS WORK."

Koestler Trust’s Board of Advisors:

At least four of the above are, like Koestler, Jewish.
Posted by ironwand at 07:56