Looking for whatever he can get

On 18 February 2008, The Sun informed us that university graduate, Inspector Chris Dreyfus, had posted the following comments on Facebook:

"A police inspector in charge of guarding the Queen has been branded a security risk after revealing his gay lifestyle on the internet. Chris Dreyfus, 29, poses in his cop uniform at a London Tube station on the social networking site Facebook. VISITORS TO HIS PAGE ARE INVITED TO 'BITE, GROPE, LICK OR SPANK' HIM.

Insp Dreyfus, recently promoted by British Transport Police to Head of Royalty and Government Protection, admits HE IS INTERESTED IN MEN AND LOOKING FOR 'WHATEVER I CAN GET'...

Dreyfus, who was, incredibly, appointed as acting inspector after just 3.5 years in the job, was a beneficiary of the Police High Potential Development Scheme, which targets what the powers-that-be regard as "high-calibre leaders of the future".

Commenting in The Guardian, Dreyfus admitted:

"I am so young... I have had people say... 'I don't think anyone should be a sergeant unless you've been 4 years a PC.' Clearly, I DON'T HAVE THE EXPERIENCE THAT OTHER OFFICERS HAVE...

The first year I did patrol work at King's Cross; the second year, because I was on this scheme, people in management give you OPPORTUNITIES YOU MIGHT NOT OTHERWISE GET."

So this is how top cops get ahead these days? Does no one out there ever think that the powers-that-be might be taking the p***? This is how Dreyfus describes himself nowadays at his own blog:

"More Johnny English than James Bond – with a dash of John Steed, a soupçon of Hercule Poirot, a delightful hint of Miss Marple and slight notes of Sir Humphrey Appleby... eccentric, a little bit geeky..."

A w*nker then. The blog tells us he is no longer a policeman

"Following several years in IT and ten years as a police officer, Chris provides Leadership Consultancy to the public sector and hospitality industry (amongst others)..."

"Chris is a passionate advocate for LGBT equality and non-discrimination, having chaired his police force’s LGBT Support Network for two years."

Makes you wonder how many gay folk in positions of power are NOT gay activists, doesn't it?

On 22 June 2008, following the George W Bush protest in Parliament Square/Whitehall on 15 June, this Yasmin Whittaker-Khan article appeared in the femail section of The Mail on Sunday.

“As a throng of protesters built up by the barriers, an extremely animated demonstrator in a white T-shirt caught my eye. He was near the front screaming abuse at the police… He pushed aside children and elderly people. He continued to shout slogans such as: ‘Pigs Out’… My friends and I, standing a few rows back, asked him a couple of times to calm down, but he ignored us…

Then it dawned on me. I had met this man at a party. I tapped him gently on the shoulder and said: ‘Have we met before?’ Instantly he recognised me. ‘Hi, how are you? It’s really nice to see you here.’

My puzzlement grew. This chap wasn’t really the sort you’d expect to see shouting abuse at police officers at an anti-war demo. He was, after all, A POLICEMAN HIMSELF – AND A HIGH-RANKING ONE AT THAT.

I’d met the police inspector at a party around last Christmas… He had a bolshie charm, was cocky and a little manipulative. He was also highly entertaining, bragging about his work in the police and how important he was.

I remained bemused about his presence at the demo… ‘Funny you chanting that,’ I said, ‘when you’re a policeman.’ ‘

They don’t have my sort in the police, love,’ he said camply, so I would assume he was referring to being gay. A few seconds later, he melted into the crowd.

I wondered whether he was at the demo undercover, DELIBERATELY WHIPPING UP TROUBLE THAT HE COULD CAPTURE ON CAMERA. THAT WOULD THEN BE USED TO MALIGN ANTI-WAR PROTESTERS AS DANGEROUS AND VIOLENT SUBVERSIVES…

Stop The War has organised about 20 marches in the past, all of which have been peaceful. This is the first where there has been violence. I cannot say this man was responsible for the trouble, but I saw him try his best to urge the crowd forward… However you look at it, the thuggish behaviour of the man I saw is hardly what you expect of someone employed to protect the public.

Our civil liberties are being eroded daily. The likes of this man are playing a part in destroying the few we have left. If our security relies on idiots like him CREATING THEIR OWN EVIDENCE TO REINFORCE FEAR, WHO CAN WE TRUST?”

Who can we trust, Yasmin? A great many less than we might presume, that’s for sure. Though The Mail’s essays and articles are usually accessible for many years after publication, the one above can no longer to be found. 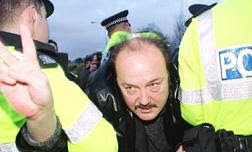 “As you may be aware I wrote to Sir Ian Blair and Mayor Johnson calling for an inquiry into the policing of the demonstration against George W Bush….

Newspaper revelations may indicate a far more sinister involvement of the police in actual law-breaking on the demonstration which sought to provoke exactly the ugly scenes which eventually ensued.

You will be aware by now of an article in the Mail on Sunday of 22 June by Yasmin Whittaker-Khan in which she recounts her shock at meeting a man, whom she knew to be a policeman from a previous encounter, who seemed determined to bring about a confrontation between the demonstrators and the police.

I can now confirm that THIS MAN WAS CHRIS DREYFUS, AN INSPECTOR IN THE POLICE.

This man, to my direct knowledge, committed four criminal offences during the 30 minutes or so he stood next to me. First, he repeatedly chanted the arcane, antiquated Americana, ‘Kill the pigs!’ This is a clear incitement to violence, indeed murder…

Secondly, he repeatedly attempted to charge the crush barriers and the police line behind them. Thirdly, he repeatedly exhorted others so to do. Fourthly, he instructed a young demonstrator on the correct way to uncouple a crush barrier, which was successfully achieved and was subsequently thrown at the police, and was presumably one of the justifications for the deployment of a riot squad which eventually waded in to the protesters.

Home Secretary, there can hardly a more grave indictment of the conduct of the police force in a democratic country than this. People in the labour movement have often mythologised the state’s use of agents provocateurs throughout my 40 years experience and no doubt long before. But, to my recollection, we have never caught one red-handed before.”


On 6 February 2009, the Socialist Unity website, which had previously reported Galloway’s letter, published the following apology:

“The matter has been comprehensively investigated by the British Transport Police and the Metropolitan Police, and that their findings have been reviewed by the Crown Prosecution Service.

The investigations did not substantiate Ms Whittaker-Khan’s story or the allegations in Mr Galloway’s letter. The CPS has confirmed that there is no case to answer.

We now accept that Christopher Dreyfus was not present at the demonstration and did not engage in any of the criminal behaviour referred to in Ms Whittaker-Khan’s story or Mr Galloway’s letter. We apologize to him for the damage caused to his reputation.”

So, the top gay cop wasn’t there, after all.

Says the top gay cop, Socialist Unity, the British Transport Police, the Metropolitan Police, the Crown Prosecution Service AND George Galloway, MP, who, apparently, changed his mind about things he saw much too up close and personal to be mistaken. For anyone but a politician, that is.

Interestingly, Ms Whittaker-Khan still has the (defunct) link to her original Mail on Sunday article posted at her own blog. Equally interesting is the fact that Galloway has never explained the retraction publicly and the media hasn't made anything more of this win/win scoop. The 'get Galloway' crowd could have had a field day as, initially, could the 'get Big Bro' folk.

Anyway, whatever this Chris Dreyfus character is now, it strikes me that he'll still be pretty much of a attention-seeking drama queen, just as he always was. Just remember, folks, this is what those you vote for have patrolling the streets, as we speak, sniffing out the bad guys.

At the very top level, this is what protects us from evil.
Posted by ironwand at 06:04