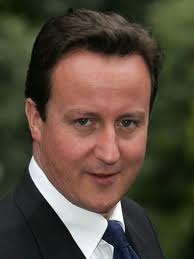 "Prominent members of the Jewish community are playing a major role in financing David Cameron’s bid for power, a JC investigation can reveal.

The biggest Jewish donor to the party while Mr Cameron has been leader is gaming magnate Lord Steinberg, who has donated £530,000, plus a loan of £250,000.

Hedge-fund owner Stanley Fink has donated £103,000, even though he was a declared supporter of Mr Cameron’s leadership rival, Liam Fox. A further £250,000 has been loaned by philanthropist Dame Vivien Duffield.

During Mr Cameron’s campaign to lead his party, Jewish figures gave his team additional donations of more than £60,000. According to the JC’s inquiries, direct donations to 'Team Cameron' in the leadership battle came from philanthropist Trevor Pears (around £20,000), Bicom chair Poju Zabludowicz (£15,000 plus £25,000 to the party), Next chief executive Simon Wolfson (£10,000 plus £50,000 to the party), former Carlton TV boss Michael Green (£10,000) and Tory deputy treasurer and key Cameron fundraiser Andrew Feldman (£10,000 through his family firm, Jayroma).

Beyond the donors, a small but influential group of Jewish Conservative officials and politicians were also key players in Mr Cameron’s campaign for the leadership. Among them was party treasurer and managing director of Cavendish Corporate Finance, Howard Leigh...

Mr Leigh worked closely with Mr Feldman in running the so-called 'Team Cameron,' and both will now be charged with broadening the party’s donor base.

Mr Feldman is a close friend of Mr Cameron, whom he met as an undergraduate at Oxford University.

Other senior figures around the leader include Oliver Letwin, head of policy.

Welwyn Hatfield MP Grant Shapps, who seconded Mr Cameron’s bid to become Tory leader, decided early on that he was the man 'of the future.'

He backed his campaign, he told the JC, because 'I saw that he had great leadership qualities.'

As a vice-chairman of the Conservative Party, he said, he would be taking the Cameron message to supporters around the UK.

Although he is popular with Jewish Tories, Mr Cameron’s criticism of Israel’s actions in Lebanon sparked doubts about his stance — voiced particularly by Tory donor and former party treasurer Lord Kalms. However, Conservative Friends of Israel chair Richard Harrington stressed that the leader had given LFI 'every possible access' and had met CFI officials several times.

The Key Players: Andrew Feldman - Destined to be charged with raising money for the new-look Conservative Party, Andrew Feldman met Mr Cameron at Brasenose College, Oxford. He is a close friend and tennis partner of the leader...

Mr Feldman attended Haberdashers’ Aske’s school... Having acted as fundraiser for Mr Cameron’s leadership campaign, he is now deputy treasurer of the party and is in Mr Cameron’s economic-policy group.

Lord Steinberg became a life peer in 2004 and is a major donor to the Conservatives... 70-year-old Baron Steinberg of Belfast was a founder of Stanley Leisure plc, the gaming company, serving as executive chairman from 1957 to 2002 and non-executive chairman since then.

He is a former deputy treasurer of the Tory party and is a founder and chairman of his family charitable trust. His political interests are listed in Dod’s, the parliamentary guide, as Northern Ireland, tax and gambling, and Israel.

A donor to David Cameron’s leadership campaign and to the Conservative Party, Simon Wolfson, will be continuing a family tradition when he becomes an adviser to Mr Cameron on improving economic competition and wealth creation.

The son of Lord Wolfson, who was chief of staff to Margaret Thatcher, Mr Wolfson, chief executive of the Next clothing chain, is one of the youngest advisors to be appointed by Mr Cameron.

Along with MP John Redwood, Mr Wolfson will jointly chair the advisory group that will seek to reduce red tape and improve education and skills in the workplace. It will also examine the country’s transport infrastructure...

As vice-chairman of the Conservative Party and seconder to David Cameron’s campaign, backbencher Grant Shapps will find the next few months extremely busy as he tours the constituencies to persuade Tories of the virtues of the new leadership."

So, according to The Jewish Chronicle, one of the 'the key players… Andrew Feldman, is a close friend and tennis partner of the leader.'
Know anyone else who might be a close friend and tennis partner of another leader? That would be bloke called Levy, wouldn't it? And a bloke who was a 'key player' in another Brit-bashing regime was 'Lord Wolfson… chief of staff to Margaret Thatcher.'

Let's contrast the article above with the November 1996, front page of The Sunday Times which introduced us to the essay, Blair's Secret Donors Exposed: 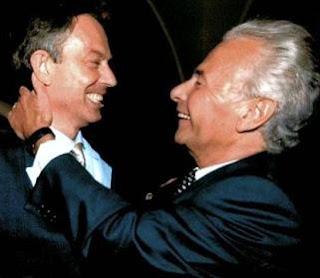 "Tony Blair is receiving hundreds of thousands of pounds in undisclosed donations through a private account despite the Labour party's commitment to openness about its funding.

A Sunday Times investigation has discovered some of Britain's richest tycoons have given donations under an arrangement made by Blair's office to disguise their identities.

They include Sir Trevor Chinn, chairman of Britain's biggest motor dealers who was knighted by the Tories, and Sir Emmanuel Kaye, a multi-millionaire… The fund… is being used to help pay Blair's staff and other private expenses. No trace of the donations appears in the labour party's accounts… The Labour Leader's Office Fund is particularly mysterious. It was established about a year ago and was manged by Blick Rothenburg, a City accountancy firm.

Michael Goldstein, a partner in Blick Rothenburg, who looked after the fund, said, 'I really don't now anything about it. Where did you get our name from?'… David Rothenburg, the firm's senior tax partner, was in Israel this weekend and unavailable for comment.

Many of the donors are pillars of the British establishment and have long and distinguished entries in Who's Who… Alex Bernstein, former chairman of Granada… is understood to have donated… Bob Gavron, a publishing millionaire who has publicly donated directly to the Labour party, has also given £35,000 to Blair's private office.

Chinn, 61, is chairman of Lex Service and President of the Joint Israel Appeal, Britain's biggest fundraising charity for Israel…

The Labour Leader's Office Fund was set up last year by Jonathan Powell, Blair's chief of staff and brother of Sir Charles Powell, an aide to Margaret Thatcher… Blair is understood to have wanted to develop a source of finance that would give him independence from the Labour party… to help pay for his private office…

Labour has made great play of its new policy of declaring all donations of more than £5,000 to the party, and has challenged the Tories to come clean on their sources of funding."

The firm that was chosen to handle the secret account, Blick Rothenburg, is Jewish, as is David Rothenburg, the firm's senior tax partner. Michael Goldstein, who 'looked after the fund,' is also Jewish.

In 2006, David Cameron took his summer holiday in Corfu with none other than his favourite tennis partner and fundraiser, Andrew Feldman.
Posted by ironwand at 09:38