The women of the world are with Israel! 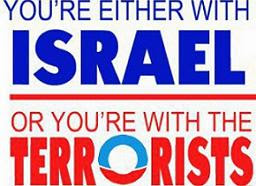 In 2011, the Facebook 'women of the world' were saying this:

"You’re either with Israel or you’re with the terrorists."

"So, the ‘women of the world’ have decided that I'm either 'with Israel or with the terrorists'? Can I not be against both where both are at fault?

OK, let's leave Israel out of it for the moment. What about the US Jewish Neocons who forced the world to war against Iraq, can I be against them?

These 'women' who have been doing all the deciding, would any of them be called Sarah, Rebecca, Rachel, Leah, Ruth, Naomi, Deborah or Esther?"

No one replied to this question.
Posted by ironwand at 13:45