So many brutish Barbies

The product of an unmarried mother and a soon-to-be-absent dad, she had lost her virginity and been expelled from two schools for violence by the age of 11.

At 12 she fell pregnant to a 28-year-old drug dealer who introduced her to ecstasy and crack. At 13, she gave birth to a boy who was taken into care soon after he was born. Of this time she says:"I didn't really take to motherhood… My mum took the brunt of looking after him… I put drugs before seeing my son. I would be so high on crack I didn't show up to the visits. Some days I couldn't even get out of bed."At 14, there was another drug dealer.

He introducedher to heroin and, at the age of 17, she had her second child. He was also taken into care shortly after the birth.

At 18, she was a crack-addicted career criminal who shoplifted and mugged people regularly. After one street robbery, she was apprehended andgiven 60 hours community service and 18 months probation.A little while later, she burgled a house, was caught again and jailed for 18 months. Pregnant again when she was sent to Holloway, her third child also ended up incare. After her release, she continued taking drugs, breached her probation and, pregnant again, was jailed once more.

She had her fifth child when she was twenty-two.

All of her children were by different fathers.A neighbour who lived next to her in Hackney said:"I looked after her baby son once. She knocked on the door and shouted at me ‘I've been stabbed, I've been stabbed! Here, look after him’ and shoved the baby in… What could I do? I just took the baby and called the police. It was about 2pm in the afternoon and the poor child wasn't even dressed… There were always people coming and going. There was loud music, arguments, things thrown out over the balcony of her flat. She was trouble - pure and simple - and a nightmare to live alongside."Another neighbour said: "I was talking to my friend outside once, and she had her window open. I said something about the social services and she thought I was talking about her, which I wasn't. She went mad and started screaming and shouting accusations at me. You could see she was a right troublemaker. Another time I was in the garden one day and she came outside and started yelling at me for no reason and then said:

‘I'M GOING TO FETCH MY BOYFRIEND AND GET HIM TO SHOOT YOU'!

SHE WAS A TOTAL BITCH. If I ever went in the garden she would be out there, watching. I don't believe she can have changed so much in such a short time - it's all a front."

Another neighbour said:"She was a VERY, VERY VIOLENT, AGGRESSIVE PERSON. People were in and out of her flat at all times of the day. I don't know what she was doing in there but her behaviour was very erratic. She didn't work, and to begin with she was always coming down to ask to borrow cigarettes and money. When I made it clear that I couldn't help her, that was when the trouble began.She had been in prison, and she lived her life as if she was still in prison. On one occasion she even pinned me up against the wall in the hallway. I HAD THE POLICE OUT TO ME ALL THE TIME. but the only advice they could give was to tell me to PACK A BAG AND MOVE OUT FOR THE WEEKEND so things could cool down.

In the end I had no choice but to move for good."So, who is this monster?

Who is the'troublemaker'who has, in her short life, taken so much from society and given so little back that was any good? Who is the 'total bitch'that produces children with drug dealers only to give them away and threatens to have her neighbours killed?She says this of herself:

"I am 26 and I am not going to give up my dream. I am going to still work on my music until I am, like, 28, and if nothing happens in the next two years then I will go to college and go and DO SOMETHING BORING."

Do something boring. Like most of us. In order to pay our way.

Ladies and gentlemen, this 'very, very violent person' is now a church-going 'full-time' mother (to two of her five children) who has 'turned her life around' and, in 2008, was the star of the X-Factor.The 23 August 2008 edition of The Daily Mail told us this:

"Simon Cowell (said): 'I love you, you’re fantastic, a breath of fresh air… Everything about this girl blew me away. There are not enough people in this country who are given second chances and I want to give this girl a second chance."

Someone should tell the X-Factor judge his 'breath of fresh air' has been given innumerable second chances. Someone should tell him that he would do better rewarding a decent person who has never been given an even break, than someone who has lived her life on the proceeds of crime and the benefit system, has never had a proper job and has done nothing but take, take, take all her short, aggressively selfish life.

But they won't.The Daily Mail added:

"Who needs a fairy godmother when you have Simon Cowell, one of the most powerful men in the entertainment industry, championing your cause?… While The X Factor's other successful contestants were afforded an average of just 60 seconds of valuable air time, RACHEL'S STORY AND AUDITION TOOK UP A FULL SEVEN MINUTES.And the programme makers knew a captive audience was guaranteed - THEY'D BEEN CAREFUL ENOUGH TO ENSURE THE PRESS GOT HOLD OF THE TALEIN ENOUGH TIME TO BUILD UP THE MOMENTUMand Rachel's chronicle of woe had already been in the newspapers for two days. The plan succeeded…Under the tight control of X Factor bosses, Rachel was encouraged to give an interview to a Sunday newspaper in which she detailed her terrible childhood and adolescence… NOW SHE IS ON THE VERGE OF STARDOM as a favourite to win ITV1’s new talent show series." 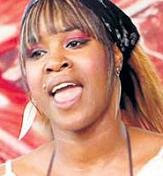 This is Rachel Hylton. 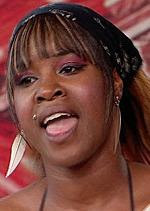 This also is Rachel Hylton.

Do you notice a bit of a difference? One is much 'whiter' and appreciably slimmer than the other. One has been cosmetically enhanced to make her more look more like you and me, I reckon. 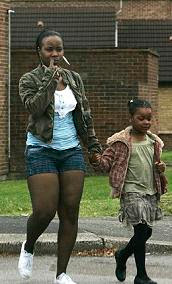 Here's a picture of what was once Simon Cowell's next big thing, with one of the children she did not dispose of in a somewhat more natural setting.

Do you notice even more of a difference? For the life of me I don't see much resemblance between the top photo, the one that the Blairite rag, The Daily Mirror, wants us to believe is the real deal, and the unposed bottom pic. I have a feeling that The Sun's photoshop experts will have been at some pains to make our Rachel look a little less jailbird-like as well, don't you?I wonder what the immigrant-enhancers of The Sun and The Mirror would make of that finger? What it happens to be doing, that is.

So, a bestial, undeserving product of a modern age that churns out Jordans; Jody Marshes; Jades and now Rachel Hyltons like so many brutish Barbies for our vulnerable daughters to gawp at, idolise and, if everything goes to plan, to emulate, was, in 2008, 'on the verge of stardom.'

Ladies and gents, if anyone tells you that Rachel Hylton is anything other than a front-line foot-soldier in the war being waged by Big Brother and the PC Crowd upon Western Man, they’d be mistaken. Oh yes, if they were dumbed-down, drugged-up teletubbies, lemmings and sheeple, or just very, very young and foolish, they’d be mistaken alright. If, however, they were bought-and-paid for jobsworths, Stalinist apparatchiks or PC activists, they’d just be telling you lies.

So did she make it? Well, she got to make an album in 2011 called 'Love Hangover'. And, I have to admit, the one song I listened to (for twenty seconds) was quite catchy and well produced. However, if you go looking for her in Google you won't find a 2012 reference so I guess the album bombed.

Never mind. Perhaps someone more deserving got that lucky break.

"The brother of X Factor star Rachel Hylton is awaiting trial for a knife murder...Brother Khyrie, 17, was accused of stabbing an alleged love rival while wearing a Scream mask. He allegedly knifed student Yusufu Miiro 16 times in the head and chest outside a flat where the victim’s girlfriend lived...

Rachel, 26, has been interviewed by police attempting to establish where her brother was when 20-year-old Yusufu was killed on July 10 this year." 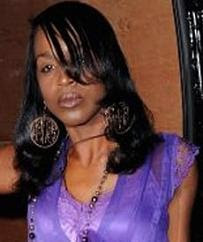 On 18 June 2008, Alexandra De-Gale was heard saying this on Channel 4's Big Brother:

"PERSONAL OFFENCE IS NEVER FORGOTTEN, do you know what I mean? We are just inside the house. I've got A VERY STRONG TEAM outside the house. I just can't wait to see my mans and them and SEE WHAT THEIR PLANS ARE, WHO THEY GOT...I'm not talking about those mans, I'M TALKING ABOUT MY GANGSTER FRIENDS. THEY GOT SOME INSTRUCTIONS TO FOLLOW OUT!I get to go out, SEE EVERYONE'S FRIENDS, I GET TO SEE THEIR FAMILY... POW, POW, POW."

De-Gale, who bookmakers said was the most hated housemate ever, had been warned twice previously about her threatening behaviour before she was finally kicked off the show after this dark, ethnic sneer.Angela Jain, head of E4 and Big Brother at Channel 4, said:

"Alex's comments will be widely interpreted as having been intended to intimidate."

Yep. When BB pointed out the unacceptability of her behaviour De-Gale told BB that such language was normal where she came from. We all knew that, didn't we? That’s why we never wanted her lot over here in the first place.De-Gale was pregnant at fifteen, got kicked out of school for smoking dope, is well known to the local police and, a few years ago, converted to Islam.

Two of the most oft-used watchwords of the New Labour government. Hey you New Labour folk! Anyone want to cohere with this creep? When youtake a peek at whom your daughter’s invited to her 18th birthday party, would any of you be pleased to see that Alexandra De-Gale has been been included?Yeah. That’s what I thought.

You don’t get rid of the cancer by nurturing it, folks. If you want to live, you cut it out.Unfortunately, those who want us gone are in charge. Those who want us gone have, for the last 60 years, put the Rachels, the Alexandras and the obscenely feckless absent dads of the black community a long way in front of the British people. You know it, I know it, THEY know it. We all know it. I just wish a few more people would dare to say it.

Those who want us gone are not shy of telling us how THEY feel, you know.

During the 4 June 2006 edition of Dateline London, the journalist and broadcaster, Yasmin Alibhai-Brown, who arrived here as a Ugandan Asian immigrant in 1972, told us, in no uncertain terms, what she wanted.

"What's wrong with white guys, by the way?"

To which Alibhai-Brown replied:

Simon Cowell’s paternal grandparents were married in West Ham Synagogue.His grandma, Esther, was an immigrant. Rachel Hylton, Alexandra de-Gale and Yasmin Alibhai-Brown are, of course, also of immigrant stock.
Posted by ironwand at 11:46