Back in the Londonistan day

"Black and Asian defendants are often treated more favourably than their white counterparts by the Crown Prosecution Service, a study suggests.

Criminologist Dr Bonny Mhlanga of the University of Hull examined 5,000 cases of young people coming in front of criminal courts. He found that while defendants from different backgrounds and different parts of the country were treated differently, there was no evidence of unfair discrimination against ethnic minorities. And in some cases, black and Asian defendants appeared to receive more favourable treatment than white defendants. The research suggests that black and Asian defendants were more likely to have their case dismissed, or be acquitted, at magistrates' courts. 'Evidence published to date often suggests that ethnic minorities receive harsher treatment from the police and the courts,' said Dr Mhlanga. 'We have seen that, at the CPS level of the criminal justice system, Asian, black and other minority defendants have often received more favourable outcomes from CPS lawyers' decisions than their white counterparts.'The report finds that the CPS is acting independently of the police - as it is meant to - in choosing appropriate cases for prosecution, and downgrading or rejecting cases where the police have brought inappropriate charges against minorities. It adds that, if anything, the CPS may be discriminating in favour of ethnic minorities. The study covered 13 CPS areas in England and Wales and a total of 6,144 young defendants whose cases finished between 1 September and 31 October 1996. Within each CPS area, the study covered the 22 branches with the highest proportion of residents from ethnic minorities. The Director of Public Prosecutions, David Calvert-Smith, said: 'The CPS welcomes this study and we are pleased that it shows we seem to be exercising our independent and impartial role'."

So, criminologist, Dr. Bonny Mhlanga, a senior research officer at the Home Office, discovers that the Crown Prosecution Service ‘may be discriminating in favour of ethnic minorities.’

Meanwhile, the Director of Public Prosecutions, the notoriously politically correct Blairite jobsworth David Calvert-Smith, interprets this information as the establishment 'exercising our independent and impartial role.’ They can't both be right, can they?

"It is my firm belief that British society is institutionally racist...

A great deal has got to be done across the whole spectrum of British society... I come to this with the idea that the whole of society has a problem."

"This House congratulates David Calvert-Smith QC, the Director of Public Prosecutions, on his being awarded a knighthood in the Jubilee Honours List; notes his strong commitment to diversity and welcomes the fact that since his appointment as DPP in 1998 the percentage of ethnic minority staff at the CPS has increased from 8.4 per cent. to 11.6 per cent. in 2002, a higher figure than most government departments; and asks him to continue to pursue the diversity agenda at the CPS with vigour."

Apart from Vaz, those who signed this EDM were:

For the Lib Dems: Matthew Green and Norman Baker.

For the Tories: Peter Bottomley.

Trevor Phillips, the Chairman of the Commission for Racial Equality, said this of Calvert-Smith:

"Following the findings of the Macpherson Inquiry he was the first head of a national public authority to speak out and say that he believed his organisation to be institutionally racist and, since that time, he has fought hard to weed out racial discrimination within the CPS.Above all, he practised what he preached on race and by the time he left the organisation there were ethnic minorities in all ranks at the CPS including many in senior positions."

Tony Blair went to the most prestigious public school in Scotland, Fettes College.

They both studied law and became barristers. Tony Blair's father was a solicitor. Calvert-Smith's father and grandfather were solicitors and his son is a barrister.

Calvert-Smith's wife is Greek and his son is married to a Swedish woman. His father and mother met while helping to care for Jewish refugees in Oxford.

And that, ladies and gentlemen, is about as New World Order, anti-white, anti-British, anti-working-class top-bloke as it gets, without being an international financier, a multinational corporation owner, a 33rd degree freemason, a media Baron or a Neoconservative American Jew.

Or a mixture of all of the above.

In the years that lead up to the suicide bombings in London on 7 July 2005, a good many hate-mongering Islamic clerics villified and condemned, in the most 'inciteful' terms imaginable, a society that had offered them, not only a welter of Social Security benefits but also sanctuary from those who would shut them up in their own country and protection from those who would shut them up in ours. The situation got so bad in England's capital that, on the continent, London became known as Londonistan.

David Calvert-Smith was the Director of Public Prosecutions when his organisation routinely refused to investigate or prosecute any of member of the Muslim clergy under the 'incitement to racial hatred,' laws, despite a wealth of damning evidence that was put before the CPS by the police. 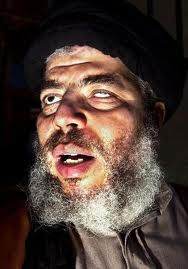 Abu Hamza, the hook-handed Imam of the Finsbury Park mosque, was the most notorious of those who remained untouched during Calvert-Smiths period of service at the CPS.

Three of the four suicide bombers who wreaked such murderous havoc on 7 July 2005 are known to have attended Abu Hamza's sermons in the Finsbury Park mosque. Two of these, actually, lived in the mosque for a time.

Following his arrest, a search of Finsbury Park Mosque led to the discovery of forged passports, CS gas, knives, guns, tents and thousands of cassettes of inflammatory material.

Such was the kind of man Tony Blair and David Calvert-Smith were routinely refusing, not only to arrest, but to investigate in any great depth back in the Londonistan day.
Posted by ironwand at 10:55