"I'm not celebrating Tyson Fury's win. His aggressive style of foul homophobia is precisely the kind that leads to young gay suicides."

The Daily Mail informed us thus:


"The 6ft 9ins British boxer, who became the world heavyweight champion after beating Wladimir Klitschko in Dusseldorf, Germany, said homosexuality is 'one of the three things that will lead to the apocalypse'... Earlier this month, Mr Fury said in a newspaper interview that 'homosexuality being legal' was one of the 'evils' that would lead the world into the hands of the devil. He sparked anger by comparing homosexuality and abortions with paedophilia.


He added: 'There are only three things that need to be accomplished before the devil comes home: one of them is homosexuality being legal in countries, one of them is abortion and the other one's paedophilia. Who would have thought in the '50s and '60s that those first two would be legalised?

When I say paedophiles can be made legal, that sounds like crazy talk doesn't it? But back in the '50s and early '60s, for them first two to be made legal would have been looked on as a crazy man again'...

He told Sky News that he saw no reason to censor his views now that he was world champion. 'It's not going to change me. I am what I am. 'Money, fame and glory doesn't change a man unless he wants it to. That's a fake person in my opinion.' He added: 'If people don't like it, change the channel. '

Weighing in at just one pound at birth, the vulnerable baby grew into an 18 stone hulk who has a custom-made bed to take his huge size. He has been married to wife Paris since he was 19 and she was 17. They have two children and another on the way."

Here's something else our world heavyweight champion was happy advise us of: 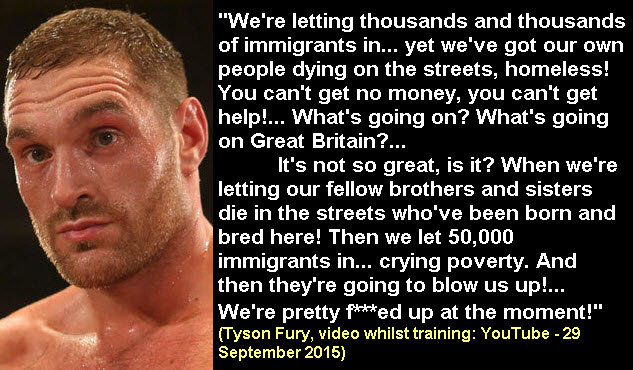 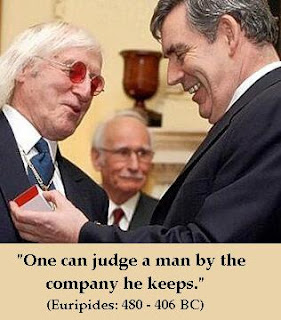 
"I'm very proud of all that this Government has achieved on LGBT rights these last 12 years - often in the face of fierce opposition."


“The Prime Minister… CLAIMED CREDIT ON BEHALF OF THE LABOUR GOVERNMENT FOR THE CREATION OF CIVIL PARTNERSHIPS, which he hailed as an example of the 'massive strides towards equality' for the gay community over the last decade…

He told campaigners THEY HAD 'CHANGED THE WORLD' by fighting for homosexual equality.”

Changed the world? Oh, yes, Gordon. You and Tony (and David Cameron, who forced the gay marriage bill through parliament even though it wasn't in the manifesto) changed our world, all right. We used to love it. Now many of us do not. Because of what you did 'in the face of fierce opposition.'


"Foreign Office minister Chris Bryant… expressed concern that gay voters might 'bank' reforms achieved under Labour and now vote for the Tories. He urged caution, saying: 'I think if gays vote Tory, they will rue the day very soon'." 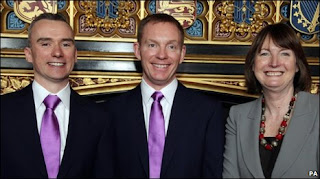 Bryant is pictured above with 'husband', Jared, and the P.I.E. woman, Harriet Harman.

Bryant studied theology before his ordination into the Church of England in 1986. He served 2.5 years as curate before becoming a youth chaplain in the Peterborough diocese. In 1991, he left the church to work for the Labour party. he was responsible for Tony Blair joining the Christian Socialists, of which movement he was Chairman from 1993 to 1998.

In 2001, He was parachuted into the safe seat of Rhondda and was soon being spoken of as a future Prime Minister in embryo. The rising star was soon heard boasting of his friendship with Peter Mandelson and his closeness to New Labour’s inner councils.


"I will not myself be distracted from standing up for the people of the Rhondda."

The rising star disappeared from the heady, New Labour firmament just as Ron Davies, of Clapham Common and 'looking for badgers' fame, had a few years before.

Nevertheless, Tony Blair brought back his fave, gay Christian Socialist two years later and, between the 2005 General Election and June 2006, he was the Parliamentary Private Secretary to Tony B's flatmate, Charles Falconer, the unelected Secretary of State for Constitutional Affairs.

In Gordon Brown's Autumn 2008 reshuffle, the good-long-f*cker was promoted from his role as Parliamentary Private Secretary to Harriet Harman to the Ministerial position of Deputy Leader of the House of Commons. In the June 2009 reshuffle, he was promoted again, becoming the Parliamentary Under-Secretary of State for Foreign Affairs. 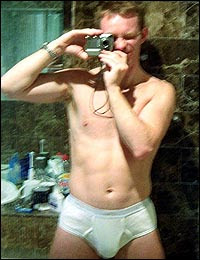 All of which goes to show that, if your gay, an MP, and cruise for anonymous and dangerous sex looking like this: the greasy pole, so to speak, will still be very much yours to slither up.

Our fine, upstanding Christian Socialist voted to go to war against Iraq on all five occasions in the 2002-2003 series of Commons divisions that led to the invasion of that country. He also voted against an amendment which sought to prevent the invasion of Afghanistan.

However, he didn't bother to sign a 2002 EDM which asked 'everyone to support the Poppy Appeal in remembering the sacrifices that have been made' by the British military over the years.

Bryant also voted to allow the adoption of children by homosexual couples and voted against an amendment which would have allowed parents a greater say over the content of sex education in the schools that their children attend. He also voted against an amendment which sought to retain Section 28, which banned Local Authorities from promoting homosexuality.

On 10 March 2003, in reply to an intervention by Ann Widdecombe, Chris Bryant said this in the House of Commons:


“THE CHURCH OF ENGLAND HAS HAD MANY GAY CLERGY… I HAVE ALWAYS FELT SECTION 28 TO BE IMMORAL… Section 28 was not brought in to protect children; it was brought in to make a declamation that HOMOSEXUALITY WAS ABNORMAL, IMMORAL AND WRONG…

The words that many gay men, lesbians and bisexuals find profoundly offensive are those that state that a local authority SHALL NOT ‘PROMOTE THE TEACHING IN ANY MAINTAINED SCHOOL OF THE ACCEPTABILITY OF HOMOSEXUALITY AS A PRETENDED FAMILY RELATIONSHIP’…

Homosexuals are in nearly every soap opera on television and many celebrities feel able to come out. Indeed, MANY HON. MEMBERS ON BOTH SIDES OF THE HOUSE ARE HONEST ABOUT THEIR SEXUALITY AND SEE IT AS SOMETHING TO BE CELEBRATED. But prejudice is alive and well…

Very few people in the gay community in London or, I suspect, across the country were not as profoundly touched by that experience as the Afro-Caribbean and Asian communities were when bombs were let off in their communities...

They don’t have to think twice any more, Bryant, me old bandit.

The homosexual, 'Afro-Caribbean and Asian' minority agendas have been well and truly rammed down the throats of a bewildered majority since you, and those who wanted to reorder our world to suit yourselves, came to power.

It’s very simple, Christopher, we don’t want people like you promoting your way of life to our kids. We don’t want them turning out like you, you see. Ms. Widdecombe believes that 'influence… can be brought to bear on a young person' that can 'transform their sexual leanings.'

Though you deny the above, what she, me, you, the entirety of the homosexual community and most sentient people realise is that 'influence can be brought to bear' that can make 'a young person' THINK they are homosexual. Or, at least, wonder if they might be.

And so they may be seduced into a life and a lifestyle that, had the subject not been promoted to them, they would have been extremely unlikely to pursue. And that, if you wish to destroy a world that works for a healthy majority, is the point, I guess.


“Chris Bryant, who once posed in his underpants on a gay dating website, said he wanted clergy to be 'much more open' to the idea of treating civil partnership ceremonies like traditional marriages.”

That's what the hornery-as-buggery bender wanted. It wasn't what I, Tyson Fury, Ann Widdecombe and the majority of straight, British folks wanted.

Bryant, Brown, Blair, Cameron, a majority of Westminster MPs, the clergy, 'gay men, lesbians and bisexuals' got what they wanted.